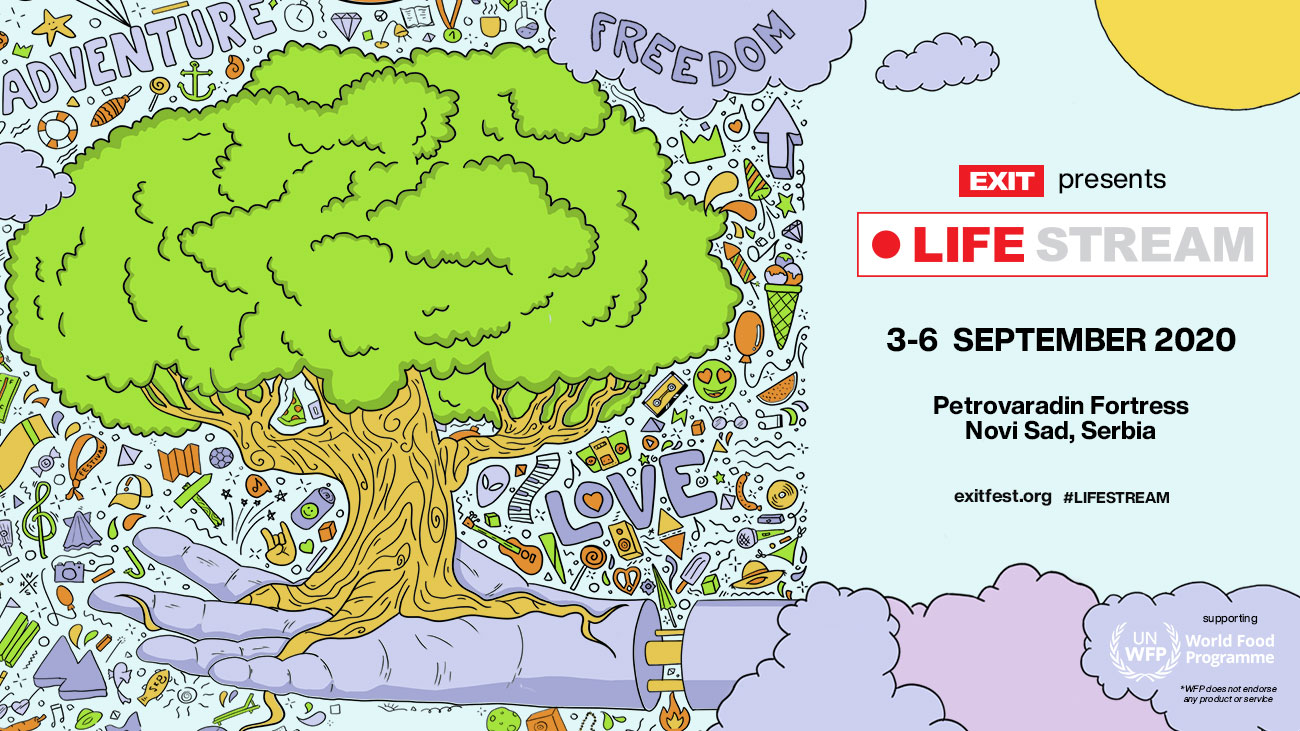 EXIT Festival in partnership with the United Nations World Food Programme (WFP), the world’s largest humanitarian organization, has launched the next step of Life Stream project to galvanize efforts towards the COVID-19 response to alleviate the suffering of millions who have lost their livelihoods to the pandemic and are falling deeper into hunger.

In the year in which the world music industry was brought to its knees, when most global festivals were either postponed or held only online, EXIT managed to realize Life Stream, a global project that will in many ways mark the 2020 festival year. Instead of a virtual world, fans were offered a full-blooded live experience, while recordings of the performances were then presented at an eight-day streaming festival, to audiences around the world. In this way, Life Stream “brought” as many as four million fans from all over the world to Petrovaradin Fortress, while it is expected that, by the end of the year, this number will exceed the 10 million mark! This marked the 20th anniversary of EXIT Festival, which will culminate from the 8th to the 11th of July 2021, when the festival in its full format will feature some of the world’s leading stars such as Tyga, David Guetta, DJ Snake, Eric Prydz, Boris Brejcha and many others.

The implementation of the project took up all of September, first with a live festival from the 3rd to the 6th and then by broadcasting recorded performances from the 17th to the 27th, which have so far collected 4,053,765 views on Facebook and YouTube. Fans also left more than 40,000 comments in which many praised the purpose and mission of the project, and among them stands out the fact that electronic music is dedicated to the United Nations and the fight to preserve the environment and solve the problem of extreme hunger, is a sign of a new era.

From September 3rd to 6th at the famous mts Dance Arena, which was set on a hill across from its original location, for the first and last time ever, the program was led by the biggest names of the world’s electronic scene, whose sets were streamed online for millions of people around the world from 17th to 20th and from 24th to 27th September.

Live behind the DJ deck there was techno queen Charlotte de Witte and resident of Berghain Ben Klock and virtually, via a special screen, the king of electronic music, the famous Carl Cox, Grammy winner and multiple winner of the best DJ in the world title, Paul Van Dyk, one of today’s biggest DJ stars Nina Kraviz and adored Black Coffee. Along with them, Marcel Dettmann, Adam Beyer, Hot Since 82, DJ Tennis, Satori live, as well as super-popular hitmakers Ofenbach, Burak Yeter and Mahmut Orhan, and the young star Ece Ekren performed live at the Petrovaradin Fortress.

A special place in the lineup and on the Dance Arena stage was reserved for the exceptional talent of regional electronic grandmasters – Marko Nastić, Tijana T, Lag, Ilija Djoković, Coeus, Space Motion, and After Affair in a special back 2 back set with Kristijan Molnar, along with Divolly & Markward, Vantiz and Lady Lee.

In addition to the music festival, an international panel named “Conscious Music” was held, within the platform “Conscious R:Evolution”, which discussed the mission of the World Food Programme and EXIT Festival, as well as the goals of their partnership.

While the sets at Petrovaradin Fortress were witnessed by a limited audience, since only 250 tickets per day were on sale, the stream weekends reached online fans all around the planet, who were able to follow the program on EXIT Festival’s official website, Facebook page and YouTube channel, as well as on Life Stream website.

Video materials and messages were broadcasted as integral parts of the recordings, which spoke about the ecological mission of the project and the work of the United Nations World Food Programme, with which it was possible to donate funds directly to this exceptional humanitarian organization. With these topics and with the support of the city of Novi Sad and the Ministry of Trade, Tourism and Telecommunications, a special part of the stream was dedicated to the promotion of cultural and tourist sights of Novi Sad and Serbia. The Days of Life Stream were dedicated to the basic elements – earth, water, fire and air – along with the environmental problems associated with them, but also the beauty and importance of the struggle for the survival of life on Earth.

As coronavirus cases soar globally, the pandemic is compounding problems and multiplying misery, especially for those on the frontlines of climate change battling frequent drought, storms and floods that strain food production, exacerbate hunger and push people deeper into poverty.

With the pandemic set to push 270 million people into food insecurity before the end of 2020 – an 80 percent increase from 2019 – the impact will be the harshest for those who were already vulnerable.

Life Stream has been launched last year together with the Green R:Evolution as EXIT’s biggest environmental project to this day. The partnership with WFP broadens the scope of the project highlighting two important causes, ending hunger and building resilience for communities in the face of climate change, that have become even more urgent in the light of COVID-19.

This year’s project is an introduction to a broader cooperation in 2021, which will mark two important anniversaries, 60 years of WFP and the 20th anniversary of the EXIT festival. Next year’s festival will feature performances by some of the biggest global stars such as David Guetta, DJ Snake, Tyga, Eric Prydz, and many more.

About the World Food Programme (WFP)

The United Nations World Food Programme is the world’s largest humanitarian organization, saving lives in emergencies, building prosperity and supporting a sustainable future for people recovering from conflict, disasters and the impact of climate change. In 2019, WFP assisted nearly 100 million people in over 80 countries.

WFP not only provides food assistance to communities affected by climate-related disasters, but also helps them become more resilient to extreme weather events.

In light of the current situation, WFP has made an urgent appeal for USD 4.9 billion which will enable it to provide food assistance to as many as 138 million vulnerable people before the end of the year. This would also be the largest mobilization in the entire history of the organization.

Established two decades ago on the foundations of social activism, EXIT has launched a number of socially responsible projects throughout its history, including the move to bring Standing Rock movement activists to the Main stage.

At Amsterdam Dance Event 2019 we launched the first ever Life Stream when the leading breakthrough DJ duo ARTBAT, along with some of the finest Balkan talents such as Andrew Meller, After Affair, Coeus and DJ Jock, followed by some of the most talked about acts at the moment, Juliet Fox, Any Mello and Abstraal.

Along with Life Stream, EXIT festival has launched Green R:Evolution, a large environmental platform born in November 2019, with the main goal to mobilize the public and initiate mass reforestation in the country, region and world, with the aim of planting over one million trees in the upcoming years in Serbia alone! The first action was implemented in cooperation with the Delegation of the European Union to Serbia on November 23 on Fruška gora, where the first 13.000 oak trees were planted! Also, The Government Working Group on Air Protection in the Republic of Serbia has adopted the initiative presented by the EXIT Foundation and environmental organizations aimed towards increasing the afforestation of our country from 28% to 40%!